I was recently officiating at a New York State High School Championship meet and got into a conversation with some other officials about diving. In New York swimming and diving are contested together with diving being one event of twelve at sectional and state meets. Similarly officals officate both swimming and diving, although when possible some preference is given to individual officals’ areas of expertise. I for example was (and am) a swimmer and while I can and do officiate diving I don’t at the state level. Instead officals with expertise in diving handle diving, and those with expertise in swimming handle swimming - all quite sensible.

I’ve mentioned sections a couple times now. New York State high school athletics are divided geographically into eleven sections, plus the New York City metro area. Sections are named with roman numerals, I through XI. Let’s make a map of where those sections are.

We’ll use the usmap package to get county-by-county borders for New York State, and the rgeos and sf packages to plot the map. We’ll also use the tidyverse collection, mostly for dplyr::mutate, purrr::map, the pipe (%>%). To actually plot the map we’ll use ggplot2 plus viridis and ggrepel because I want it to look nice and be colorblind friendly. Later we’ll use flextable to print out a nice table of results.

First we’ll load libraries, then use usmap::plot_usmap to get x and y coordinates for New York State and the county borders. We’ll then extract those coordinates, called data in the ny_map object, to a dataframe. We extract data because the usmap::plot_usmap object also includes a bunch of other stuff we don’t care about right now.

Now we’ll label the counties based on which section they’re in using dplyr::case_when.

Of course it’s not enough to just have the sections differentiated on a map. We need centered labels featuring section names. The center of an irregular shape is called a centroid, and can be calculated using rgeos::gCentroid - that’s where we’ll put the label. First we’ll need to extract the x and y values from our df and convert them into spacial coordinates using sp::coordinate. After that we’ll clean up the resulting dataframe df_centroids

To take a look at df_centroids we can see x and y values labeled as such, and ind, which has the corresponding section name.

Between df, which has our county-level state map, and df_centroids which has the center of each section and the section name we now have enough to make a map. 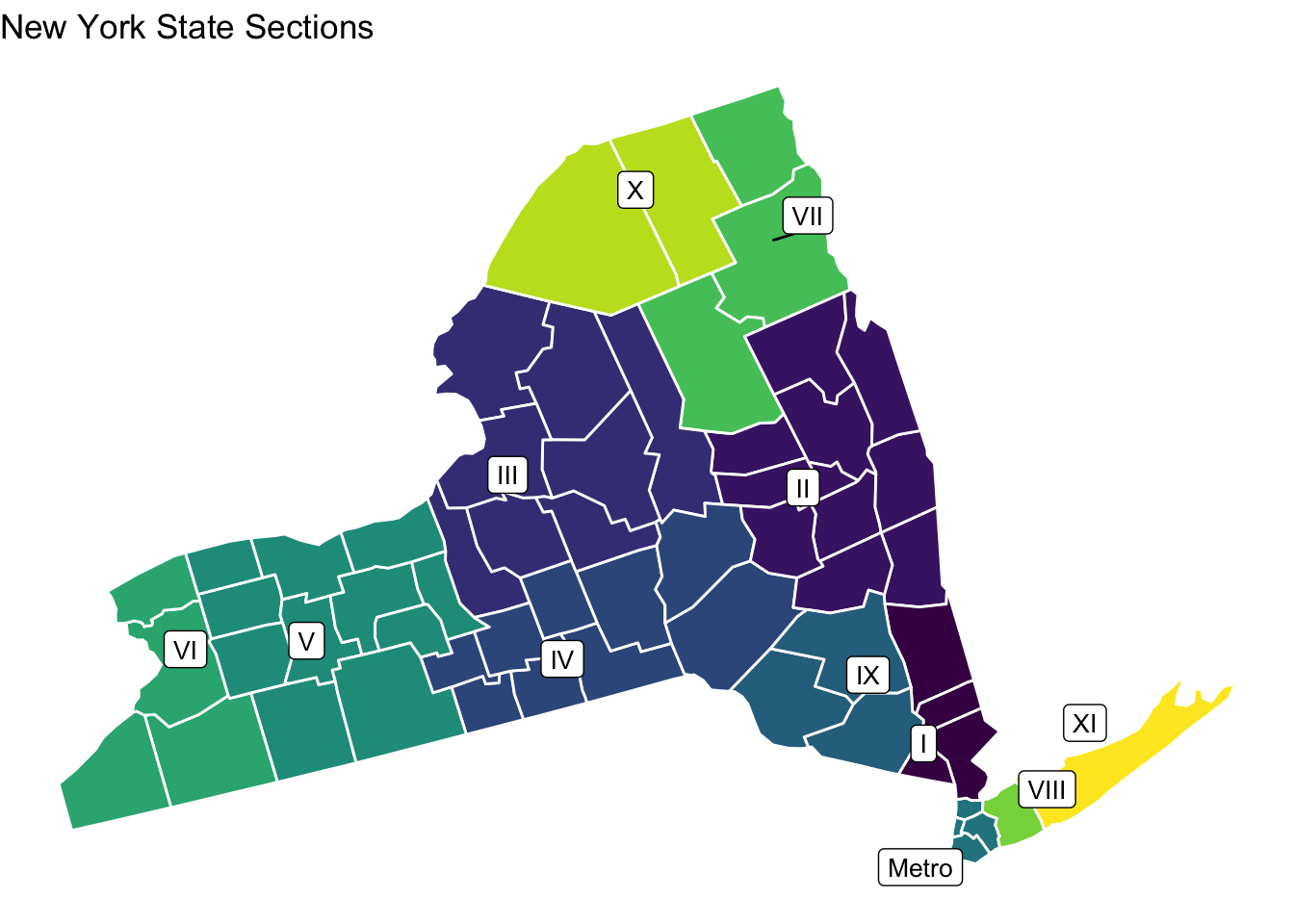 Lovely! Okay, back to the story. Several officials where talking about diving, and some were saying that divers from a particular section were underperforming relative to their qualifying score and that this had been going on for some time.

By way of explanation, athletes qualify for the state championships by meeting a certain standard, called a “cut”. In swimming this cut is a time - swim a particular race faster than the cut time, and you qualify. In diving the cut is a score - score higher than the cut score, and you qualify. The difference though is that times are objective, timing systems are automatic, so there’s no human element. Diving scores on the other hand are dependent on officials who judge diving, including me (below the state level). Officials take scoring very seriously and do their best, but there’s real variance between officials depending on how they’re positioned relative to the diving board, glare off the water or from windows, and personal factors as well. Once at the state championships athletes are seeded with respect their qualifying time or score, with better performing athletes given preference with respect to lane assignment (swimming) or competition order (diving).

What was being postulated in this conversation is that diving scores from a particular section were higher than they should have been, meaning that athletes who perhaps should not have qualified for the state championships at all where present and competing, and that some athletes were gaining a benefit with respect to their competition order on the basis of inflated scores. Serious stuff!

So the question is: “Is there a section in New York State from which divers routinely underdive their qualifying scores at the state championships?”

To look back at years of New York State diving results we’ll need to source those results, and then wrestle them into R. This is a job for my SwimmeR package. It’s also a long job, taking upwards of 30 minutes depending on your computer and internet connection, because swimming and diving results are entangled. Rather than going through all of that I’m going to start with a subset, containing only diving results going back to 1998, and available here.

The ID variable indicates unique athletes and is an attempt to address people sometimes using nicknames (Greg vs. Gregory for example).

Fist we’ll collect all the divers who competed in a given year’s state championship meet.

Next we’ll create new variables Season_Best for the highest score the athlete achieved in a non-state meet for a given year. This would be the athlete’s qualifying score. We’ll also collect each athlete’s score from that year’s state meet

Then we’ll filter for only divers who placed in the top 20 at the state meet. This is because only the top 20 divers get to do all their dives. Divers are eliminated in rounds, after having completed a subset of dives until only the top 20 remain. Only scores from these top 20 can be reasonably compared to qualifying scores.

We’ll filter to keep only divers with Season_Best >= 395, a somewhat arbitrary cutoff, but one that removes divers who qualified during a 6 dive competition, rather than the 11 dives used at state championships. Please note that for several years now divers have not been able to qualify for the state championships with 6 dive scores.

Oh. Well this is embarrassing. There isn’t one section underdiving, there’s nine and Sections VII & X aren’t represented at all. That’s 100% of sections with divers in the top 20 that are underdiving by 10-20%.

Just for fun, let’s stick that on our map too. 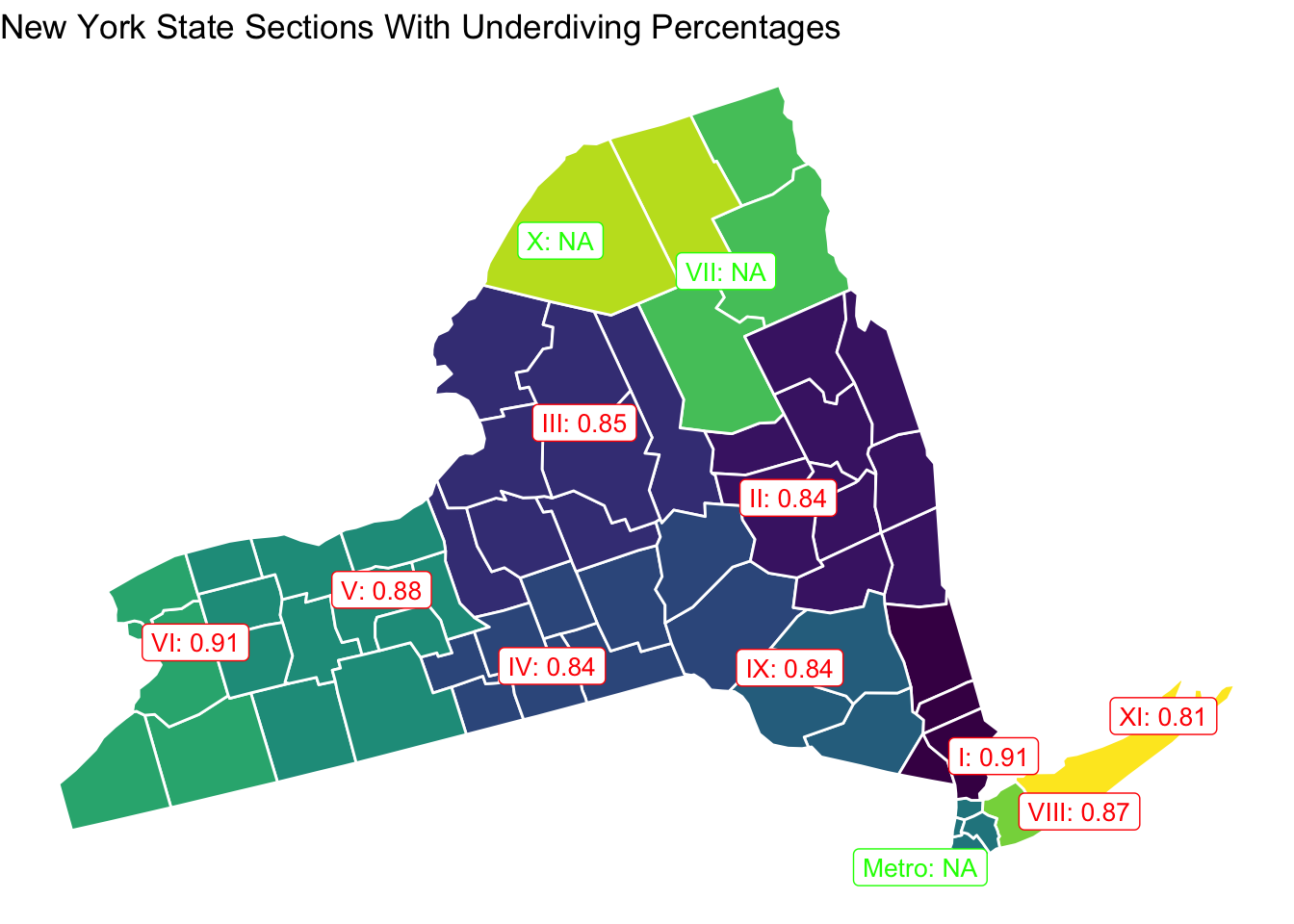 To be fair - Section XI is underdiving by the widest margin, but since all the sections are doing it this is now an issue of degrees, not occurrence. As to why it’s happening - a few non conspiracy theories: