There’s a new version of SwimmeR available, 0.12.0, which includes capabilities for parsing swimming results from the 2020 Tokyo Olympics. Naturally I’m going to use it to investigate the theory I have about volleyball.

To play along at home you’ll need a version of SwimmeR that’s at least 0.12.0, so go ahead and grab that from CRAN.

To do this analysis we’ll use a few tidyverse packages plus flextable.

Omega, the official timing partner of the Olympics, has released swimming results by round (heats, semis, finals) and event. That’s a lot of pdf files, but I’ve collected them into a Github repository here. We can use SwimmeR to parse all of them and build a single data frame with all the 2020 Olympic results. Collecting and parsing the results will proceed in much the same way as other Swimming + Data Science adventures like Scraping Websites and Building a Large Dataset with SwimmeR, Dataset of All ISL Results Season 1 and 2 and COVID Impacts in Swimming Results?.

Basically assemble a list of links with tools from the rvest package and then map SwimmeR’s read_results followed by swim_parse over that list.

Years ago there was an event called the Empire State Games. It was an Olympics style event held in New York every year, with winter and summer versions hosted at different SUNY campuses across the state. It was awesome but sadly is no more, a victim of budget cuts.

One year when I was competing the Games were held at SUNY Binghamton. SUNY Binghamton doesn’t have a 50m pool though, so the swimming portion was actually held 90 minutes away at SUNY Cortland. For other reasons unknown to me volleyball was also held at SUNY Cortland, which meant I watched a lot of volleyball. I’d never really seen volleyball before, and found it to be very enjoyable. I enjoyed women’s volleyball more than men’s but wasn’t really sure why (it wasn’t the shorts, don’t be disrespectful).

After puzzling on it for the entire week I came up with this theory.

Summing up - the women’s volleyball game has relatively stronger defense vs. offense, leading to longer volleys and a more exciting game

It was over a decade ago that I came up with my theory, and now is the time to test it. Those Tokyo Olympic swimming results have reaction times, and while swimmers aren’t volleyball players I think there’s reason to believe that gender differences in reaction time, if they even exist, will hold across sports.

Now all we need to do is collect reaction times by athlete and then by gender.

Hmmm, something interesting has happened. You may not know it, but all of those athletes are backstrokers. Backstroke uses a different start compared to the other swimming disciplines, so we need to address that. 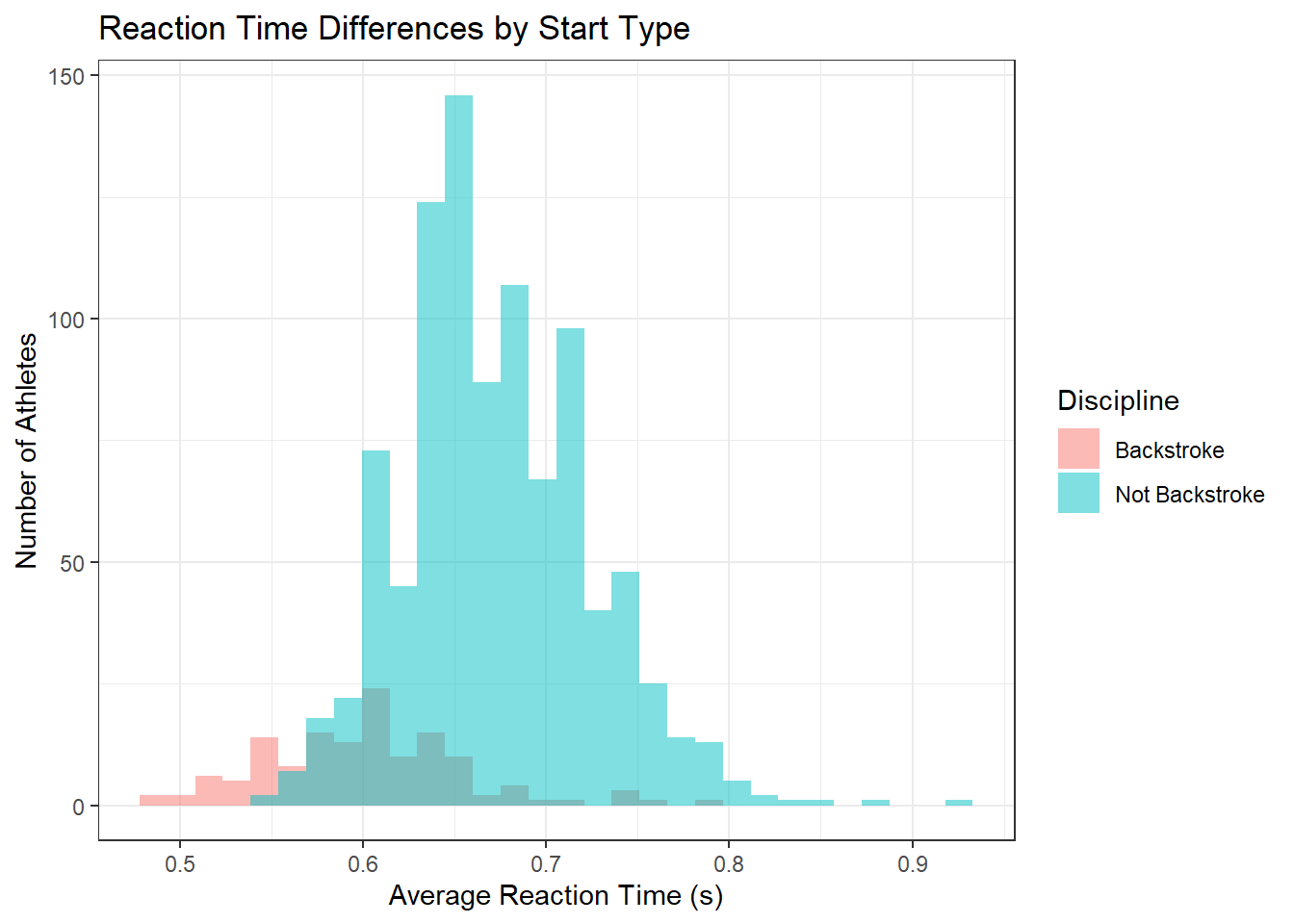 Breaking gender out visually - looks about the same to me. We’ll need to test to be sure though. 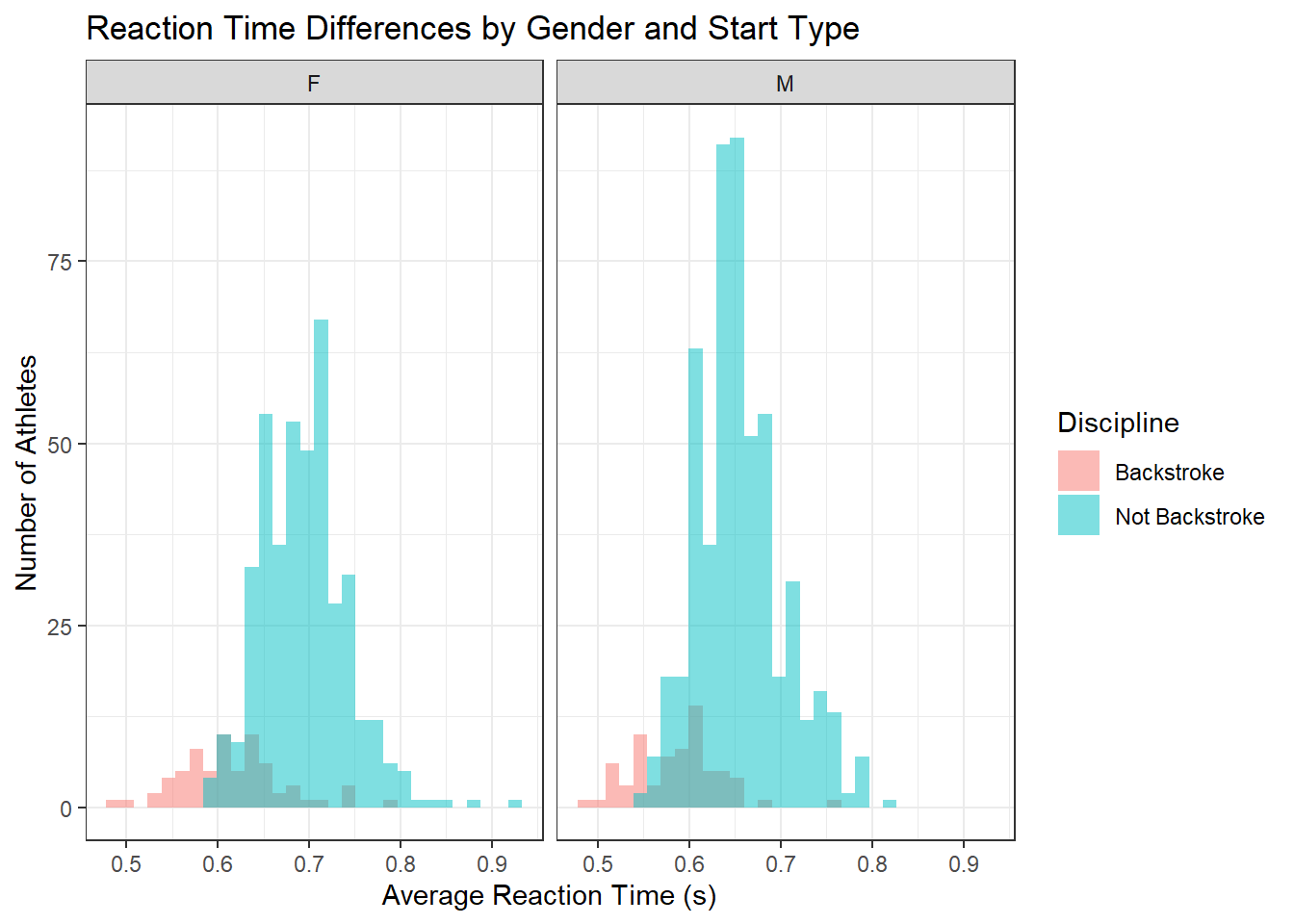 Histogram data looks normally distributed, so t tests are appropriate means of comparing two sets of data. Throughout I’ll use 0.01 (99%) as my significance level.

The p value is 0.0013694 which is less than 0.01, so we can reject the null hypothesis and embrace the alternative hypothesis. Average reaction times for male and female backstrokers are not the same.

Similarly the p value for comparing non-backstrokers is 3.8904097^{-34}, which is also less than 0.01, so we can reject the null hypothesis here too. Average reaction times for male and female non-backstrokers are also not the same.

While not specifically relevant to my volleyball theory we can also check our observations from the histogram above and determine if our population of backstrokers has significantly different reaction times from our population of non-backstrokers, again at a confidence level of 99% (0.01).

So we’re seeing a statistically significant difference between the reaction times of male and female swimmers. That said, what’s the actual difference?

There’s lots of sports science about ball velocity in volleyball. This review article1 collects much of it and cites this article2 reporting the spike speeds of elite male Italian players using an elevation style spike at 25.6 m/s and similarly elite female Italian players spiking the ball at 20.1 m/s using the elevation style. Comparable numbers are observed for athletes using the backswing style of spike. That means men spike approximately 25% faster than women. We found men’s reaction times to only be about 5% faster than women’s. From the evidence I’ve been able to uncover so far I’m concluding that my theory is largely correct. The women’s volleyball games I observed probably did have longer volleys. Of course if I’d been really on my game I would have counted some, but that ship has sailed. This analysis could also be deepened, perhaps by including a race-type component when considering swimmer reaction times.

There is also some literature evidence for my theory - that defense is relatively more potent compared to offense in women’s volleyball than in men’s volleyball. Here3 authors show that women have more successful digs, and fewer faulty digs than men at the 2000, 2004, 2008 and 2016 Olympics.

The key messages I hope you’ll take from investigating my volleyball theory have nothing to do with gender based performance differences. Instead they are:

Thanks for reading, we hope to see you again here at [Swimming + Data Science]!