If you’re only going to read one line of this post let it be this one: v0.6.0 of SwimmeR is now available from CRAN and it’s better now than ever before. But don’t just stop at one line though, grab that update and come along on this journey, deep into the heart of SwimmeR.

The rest of this post, which I promise will be super interesting and even have jokes, is about the tidy framework, inconsistencies in source material, subcategories and my failure to get all those things to play nicely together in the context of SwimmeR. I realize calling it a failure makes it sound like I was lying a few lines ago when I said that SwimmeR v0.6.0 is better than ever before, but I wasn’t. Don’t jump to conclusions.

Before going any further though there’s one important, breaking, change. The output of swim_parse has been modified, such that the Grade column is renamed to Age and the School column is renamed to Team. These are frankly overdue changes, which reflect the broader applicability of SwimmeR outside the American high school swimming arena I first developed it for. My apologies and please adjust your work flows.

Tidy is a way of organizing data that’s been championed by Hadley Wickham. He’s, I think indisputably, the most famous proponent of R, and from his post as Chief Scientist at RStudio he’s in a prime position to drive his personal philosophies forward. One of those philosophies is tidy data. He also has a distinctive first name, so you’ll often see him referred to simply as Hadley, like he’s Kobe or Madonna or something, but that’s neither here nor there.

In spite of what I see as tidy data’s real utility, bemoaning the influence of Hadley Wickham/RStudio is something of a sport in the R blog-o-sphere. This is the Swimming + Data Science blog though, and the only sport we care about here is swimming (and also diving). I’ve got my hands way too full dealing with getting SwimmeR releases out, the International Swim League changing their results formats for no reason, and breaststrokers trying to cheat all the time to be complaining about someone releasing free tools. I need all the help I can get.

Back to SwimmeR v0.6.0 and its many improvements…

SwimmeR can now read split times. Both the swim_parse and swim_parse_ISL now have another argument, called splits. Setting splits = TRUE will direct each function to attempt to read in splits. The default is FALSE so splits won’t be collected unless you, the user, decide they should be.

In swim_parse there’s another argument, splits_length. This is the length of pool at which the splits are recorded. It’s usually 50 (the default).

Sometimes though splits_length should be set to 25, because splits are taken every 25 meters or yards.

This is new, exciting, and undoubtedly the most requested feature, so there you go people - enjoy!

“All that sounds great”, I hear you saying, “and your examples worked flawlessly!” Wrong, wrong, wrong. I picked those examples as traps. Splits can be trouble, as Ricky Berens well knows. 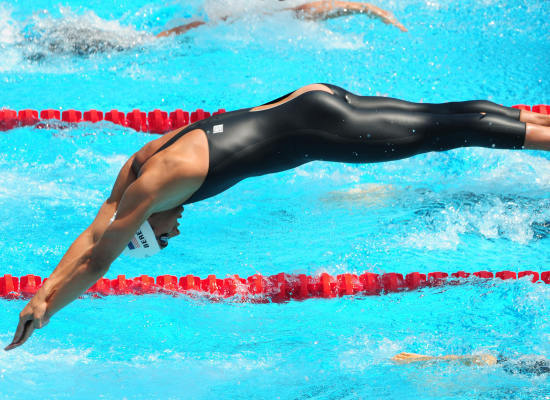 Not where you want a split

Here’s the problem. SwimmeR reads in data from sources, but it also imposes a structure on that data, a tidy structure in fact. In versions prior to v0.6.0 there was no issue with imposing a tidy structure, it didn’t chafe at all, because the source data SwimmeR was reading in was fundamentally tidy. Each row was a swim, each column the corresponding event, or athlete name, or final time. Splits are different though.

Non cumulative is the same, just without the adding. Your split for the 50 is still 29.00, for the next 50 (not the 100), it’s 31.00, for the third 50 (not the 150) it’s 31.50. This is fine too. SwimmeR prefers non-cumulative splits due to tidy principles - each split is it’s own variable, rather than the splits being collections (sums, or accumulations) of other splits/variables but if only cumulative splits are available SwimmeR will take them.

I could of course convert the cumulative splits to non-cumulative.

I can do the conversion here, and I could have built the conversion into swim_parse and swim_parse_ISL, but there’s a tension, between the extremely useful tidy framework on one hand, and fidelity to the source material on the other. SwimmeR thus far gives users the choice. You can choose to read in splits (and remember, the default is not to), and then you can choose how you treat splits if you decide to read them in. You can choose between tidiness and fidelity.

I may bundle the above code, for converting split types, into a future version of SwimmeR but if I do its use will also be at the discretion of the user.

And what if the length at which splits are taken varies within a meet, or even within a race? Have a look at this:

The splits are by 25 for the first 800m of this 1500m freestyle, but for the last 700 there’s only one split, for the whole 700m. swim_parse faithfully reproduces this, except that it doesn’t know that suddenly the split length has changed mid-race. The result is a column labeled Split_825 that isn’t actually the 825m split.

There’s nothing I can do here - I can’t recreate splits that aren’t included in some form in the source data. You’ll just have to know what’s going on in your results.

Relay swimmers aren’t anywhere near as troublesome as splits, but they’re still in tension with tidy principles. Let’s say you were interested in what races a particular athlete had participated in. It’s easy to filter or in some other way subset the data based on Name. With relay_swimmers = TRUE though that athlete’s name might be in Name or it might be in one of the relay swimmer columns. Having one variable (athlete name) in multiple columns is not tidy.

I could put relay swimmers in the names columns, but then what to do about their times? They don’t have a Finals_Time in the normal sense, only their splits, and as you’ve just read that’s a whole other mess.

Again my approach here has been reasonable fidelity to the results, and letting users decide if they want to opt into tidy troubles (by affirmatively setting relay_swimmers = TRUE).

To be clear, in neither the case of splits nor the case of relay swimmers is the issue with the principles of tidy data as such. They’re fine, sensible principles, although they do have their limitations. The issue is also not with the conventions of reporting for swimming data. They also make sense and are perfectly usable for the millions of people who participate in the sport every year. The issue is in the tension between the two - how to put swimming data into a computationally useful format, while still being friendly to the human analyst. This is the central tension at the heart of SwimmeR, all the more on display now in v0.6.0.

Thanks for reading, and be sure to come back to Swimming + Data Science where next time we’ll be doing a look back over the recently completed International Swimming League Season 2! Lilly King will be involved, so get excited.